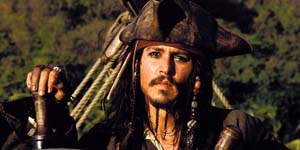 Oh sure, everyone knows Captain Jack. But how well do you know his mates and their movies?