Would You Make A Good Partner For Thor? 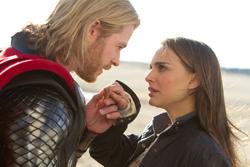 See what hero you would make a great match for!


Questions: 10  |  Attempts: 240   |  Last updated: Feb 12, 2018
Ultimate Questions On Film: Trivia Quiz!
Ultimate Questions On Film: Trivia Quiz!
Are you an expert on questions about films? Could you pass this quiz? For this quiz, you will need to know which film used a feeling of claustrophobia at the climax, which silent film includes eighty-eight minutes free of...